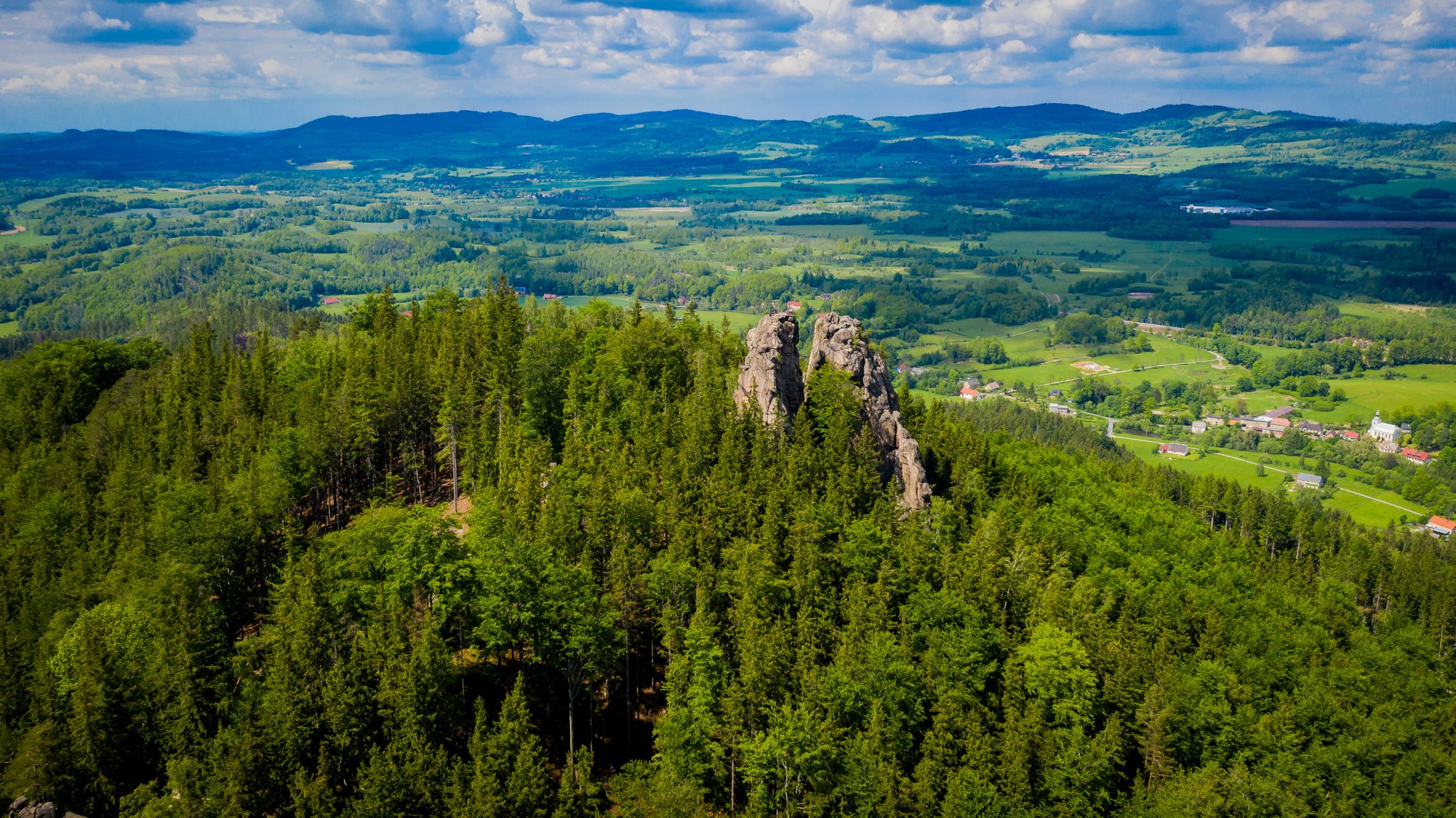 Where to go on a one-day trip to spend time actively and at the same time enjoy wonderful views? We have a proposal! These are the Sokole Mountains belonging to the Rudawy Janowickie, namely Krzyżna Góra and Sokolik. It will be active, it will be beautiful, but there will also be a place to relax. So let’s pack our backpacks and off we go. Lower Silesia is waiting to be discovered!

Sokole Mountains(Sokół is a Falcon in Polish) are adored by climbers. The numerous rocks here offer many opportunities for climbing and experiencing a real adventure. However, we will focus on the hiking route. We can start our hike to Krzyżna Góra and Sokolik in Trzcińsk (leaving the car there, for example near the church) and from there, passing the river and following the trail, go to the shelter Szwajcarka (the Swiss). We can also shorten the route and drive the car to the parking lot right next to the shelter.

It is in Szwajcarka that we recommend stopping to gather strength, rest, have a pancakes or hot coffee. What is the uniqueness of this place? Szwajcarka is the only wooden shelter in the Sudetes that has retained its original shape and appearance. It is also the oldest facility of this type in Poland. It was named after the wife of the first owner, Wilhelm von Hohenzollern. The building initially served as a hunting lodge and occasional accommodation for its owner. Only later, when the route leading to Krzyżna Góra became very popular, Szwajcarka started to function as a tourist shelter. Today, the PTTK(polish tourist association) shelter operates there, from which we start our hike to Krzyżna Góra and Sokolik.

Following the trail from the shelter, we come to a crossroads that leads to two peaks. Both are worth visiting and are located a short distance from each other. The first trail leads to Krzyżna Góra, the second to Sokolik. Let’s climb both hills one by one.

Krzyżna Góra (654 m above sea level) is the highest point of the Sokole Mountains. Formerly known as Sokola Góra, it received its present name due to the seven-meter high cross placed on its top. The iron cross on the mountain was consecrated on May 28, 1832 and founded by Princess Maria Anna Amalie von Hessen-Homburg to commemorate her husband’s birthday. The ascent to the top is quite steep, but the climbing is made easier with stone steps. It is worth the effort, because the view is simply fabulous.

The second peak to which the trail will lead us (when we return from Krzyżna Góra to the fork) is 644 m above sea level. Falconet. Metal stairs lead to its top (attention is quite tight), and from the top, where there is a vantage point, there is a beautiful panorama of the Karkonosze Mountains, the Kaczawskie Mountains and the Jelenia Góra Valley. You can also clearly see Krzyżna Góra, from which we descended not so long ago.

The Falcon Mountains are a paradise for climbers, hikers and whole families. Inviting the already popular Krzyżna Góra and Sokolik, but also with the Brewery and Rudzik. It’s worth getting to know these peaks closer and going on your own hike. Towards an active adventure!