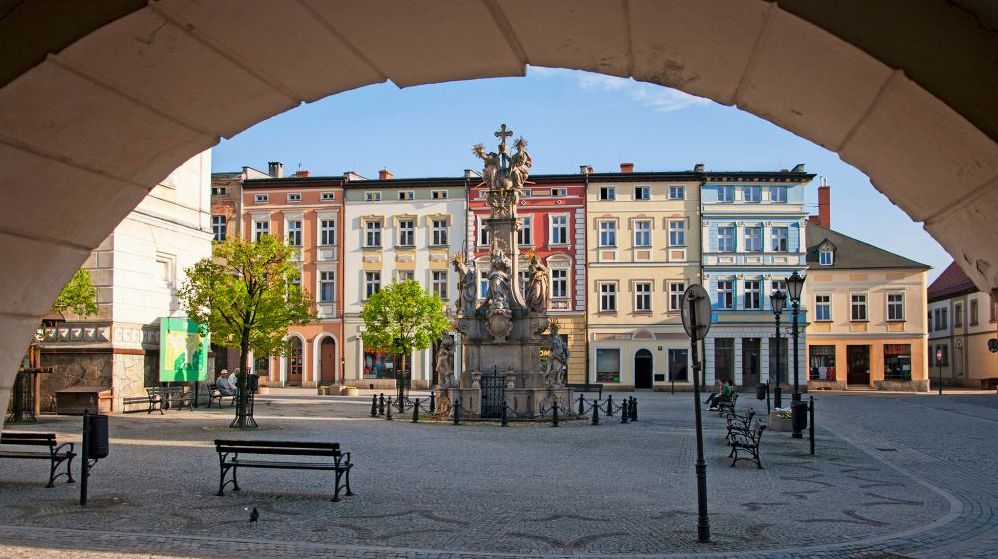 Ladek-Zdroj is located in the south-eastern part of Klodzko Land in a narrow structural basin along the Biala Ladecka River and on the hills surrounding it. The whole area is covered with magnificent beech, mountain elm, larch, sycamore, spruce and fir trees and surrounded by small but beautifully shaped hills with many paths and walking routes.

Learn about the offer of Ladek – Dlugopole Health Resorts Ltd.

Originally, Klodzko land was inhabited by the Slavonic agricultural population with the largest clusters in the area of present-day Klodzko, Bystrzyca Klodzka and Miedzylesie. In the 9th century the Slavic settlement formed ancestral communities that merged into tribes and larger units that gave birth to local state organisms. At the end of the tenth century these lands were occupied by southern neighbours, princes of Libice, and were subordinated to the Czechs. At the beginning of the 11th century, Boleslaw Chrobry restored the lands to Poland. From 990 to 1341 they repeatedly came under the rule of either the Czech Republic or Poland. In 1341, after the death of Prince Bolek of Ziebice, Klodzko land was re-incorporated into the Czech Republic, and after a few centuries it was annexed to Prussia and then to Germany. It returned to Poland only in 1945.

It is assumed that the date of establishment of the spa determines the year in which the organized form of treatment was started and when the dates diverge the oldest one confirmed is used. In very old health resorts, which include Ladek-Zdroj, determining the exact date is impossible not only because of the distant time but mainly because of the destruction of all documents as a result of wars, fires and other cataclysms. In such cases, the date of the establishment of the spa is determined on the basis of indirect historical documents or historical descriptions from a later period. These are often supported by excavations of buildings and equipment, which are an additional confirmation of the approximate date. It is accepted on the basis of indirect evidence that spa treatment in Ladek-Zdroj already existed around 1241. This is associated with the great Mongol invasion of Europe in the 13th century, when the Tatar army after the victorious battle of Legnica on April 9th 1241 headed for Hungary destroying a number of towns on its way and Ladek was one of them.

At the end of the 18th century and the beginning of the 19th century, many outstanding guests stayed in Ladek, f.ex. in 1790, Johan Wolfgang Goethe, in 1800, Queen Louise, the wife of Prussian King William III, and John Adams, later a president of the United States. In 1813, Prussian King Friedrich Wilhelm III came to Ladek to undergo a treatment for several weeks and met in August, on his birthday, with Russian Tsar Alexander I. Starting in 1876 Dr. Aleksander Ostrowicz (1839-1903), a Polish doctor born in Gostyn in Greater Poland, worked in Ladek for almost 28 years. Dr. Ostowicz published in Polish in 1881 a monograph devoted to the heath resort, in which he gave the physical and chemical properties of the spa resorts, the effects of bathing in the pool, tips on the use of spa treatment, a description of spa and bathing facilities as well as walks and trips in the vicinity of Ladek. On May 9th 1945, troops of the Soviet Army entered Ladek-Zdroj and they quickly set up treatment facilities for their own needs. Only a small part of the complex, consisting of the buildings of the current ‘Adam’ Hospital, was transferred to the Polish authorities on August 25th 1945.

At the beginning of 1946, the Board of the State Health Resort was established and it organized the first treatment stay on May 1st 1946. Patients benefited from therapeutic procedures in separated cabins in the natural medicine facilities under the management of Soviet troops. From May 1st 1946 on, Ladek-Zdroj began to intensively develop its spa services and year-round therapeutic activities were introduced for the first time as before it had been only a seasonal, usually from May to mid-October, activity for centuries. In 1949, the Employee Holiday Fund (FWP) was established and it quickly developed its activities and significantly intensified life in Ladek. In 1965 the spa resort of Ladek Zdroj merged with the resort of Dlugopole Zdroj, 36 kilometers away, and the ‘Ladek-Dlugopole Health Resort’ was established as a State Enterprise with the management in Ladek Zdroj.

Between 1970 and 1978 the spa developed particularly intensively as the number of patients increased significantly thanks to spa and municipal investments and the building of several nursing homes, including industry sanatoriums. The largest number of patients at the spa was in 1977-1978 with more than a million treatments (not counting the Soviet sanatorium), and the natural medicine facilities were open from 7am to 9pm. After this period the number of people arriving at the spa gradually decreased. In the 90s the City Hall took over a significant number of facilities and buildings after the former Soviet sanatorium and sold or leased them. During this time the entire town turned to gas fuel thanks to which natural medicine centres, sanatoriums and holiday homes as well as a significant number of private homes switched to gas heating, which greatly improved the condition of air.

In 1984 the ‘Wojciech’ natural treatment centre and the residential part for patients of the sanatorium ‘Stefan’ were closed and a major renovation started. However, due to the lack of financial resources, only demolition and masonry works were carried out in the sanatorium part and the renovation was suspended. In June 1991, the renovation began intensively again. On February 22nd 1994 a well-constructed and equipped sanatorium section with 47 beds in 23 rooms was made available. On April 23rd 1997 a treatment section was opened with a representative lobby, a magnificent swimming pool and a beautiful pump room for medicinal water that had never been in this facility before. On August 7th 1998 the bathing area with marble bath tubs was handed over and its decor was much better than it had been before the reconstruction. During that time a number of changes were made to modernize natural medicine facilities and to do modernization works in spa hospitals and in most sanatoriums and private guesthouses. Spa treatment in Ladek-Zdroj developed in a modern way thanks to the creation of Science Centres and the appointment of Spa Consultants in ‘Ladek-Dlugopole Health Resort’ State Enterprise in Ladek-Zdroj and the Central Military Sanatorium Complex (with subsequent changes in the names of these units). As a result of their scientific activities about 150 scientific papers were published. This activity was most intensively developed at ‘Ladek-Dlugopole Heath Resort’ State Enterprise in Ladek Zdroj, currently Ladek-Dlugopole Health Resort Ltd.

The climate of Ladek-Zdroj is defined as a mountain and strongly stimulus, classified as such because of its geographical location and altitude. An additional element is the location of the spa on the river in a narrow valley with a predominance of buildings located on the northwest slopes of the surrounding hills.

Modelled on the Turkish baths, this late seventeenth century building was thoroughly rebuilt two hundred years later. In the interior, centrally located under the dome, there is a round marble pool for therapeutic baths, around which runs a series of treatment rooms with marble bath tubs and above them there is a mineral water pump room. In the side part of the building there is a permanent exhibition ‘The history of Ladek-Zdroj resort’.

Parish Church of the Birth of the Virgin

It is a Baroque building, the third in turn (after the Gothic and Renaissance), consecrated in 1697. The nave is barrel-vaulted, there are a hall interior and frescoes by E. Reimann. Valuable figural sculptures from the workshop of the greatest sculptor of Klodzko region Michał Klahra (Crucifixion Group) and his son Ignacy (pulpit, Rococo confessional) ornament the church. Both artists – residents of Ladek – were the authors of 39 full and half wooden sculptures.

The two-span Gothic construction from 1565 resisted all floods. This was apparently the result of using chicken proteins instead of lime. In the Middle Ages a customs officer’s house was located next to the bridge. A figure of Saint John of Nepomuk from 1709 is a fairly accurate copy of the figure from the Charles Bridge in Prague and is one of the oldest in Silesia. The bridge is in Krotka street.

Arboretum
Forest garden of exotic trees and shrubs, it is the highest located of its kind in Poland. It is open from spring to autumn and you can admire over 250 species of trees and shrubs from around the world, including: dawn redwood, Sequoiadendrum giganteum, or Japanese cedar and, in spring, beautifully blooming azaleas and rhododendrons delight the eye.

Ruins of the Karpien castle (German: Karpenstein) – on the top of the Karpiak mountain (758 m a.s.l.).

In the fourteenth and fifteenth centuries Karpien was the centre of a small state covering the area of the upper Biala Ladecka river valley and its tributaries above Radochow. The castle guarded the nearby Karpow Pass where the trade route, so called the Salt Route, ran. Destroyed during the Hussite wars, it became the seat of robber knights.

In the 16th century stone was obtained from here to build the oldest treatment facility ‘Jerzy’.

Until 1966, the largest cave known in the Polish part of the Eastern Sudetes. It has over 256 meters of underground corridors. Visiting the Stalactite Cave (former name) equipped with a flashlight you can feel like an explorer.

At the top of the Cierniak mountain there is a mountain chapel of the Help to the Faithful and 214 stone steps from the mid-nineteenth century lead to its door. Around the temple there is the Way of the Cross with clinked chapels, partly glazed.

In addition, the following attractions are available in Ladek: Horse riding, a salt and iodine cave, a shooting range, cycling routes the Town and the Commune of Ladek Zdroj, ponds, an off-road car club, a climbing school, and a mountain bike and winter equipment rental.

NATURAL TREATMENT CENTRES IN LADEK-ZDROJ:
– ‘Wojciech’ Natural Medicine Centre, 57-540 Ladek-Zdroj, 3 Marianski square, phone: +48 74 81 46 227 ext. 251.
‘Wojciech’ (formerly Marienbad) is the first bathing establishment over the spring discovered here built in 1678-1680 by Z. Hoffmann. It was named ‘Marienbad’ in honour of his wife. The contemporary facility is a neo-baroque bathing facility built in 1880 according to the design of Herman Völkel, with a beautiful pool and 25 marble baths. It is a real pearl of not only Polish but also European spas delighting patients from all over the world.
– ‘Adam’ Natural Medicine Centre, 57-540 Ladek Zdroj, 2 Wolności street, phone: +48 74 81 46227 ext. 251.
‘Adam’ is a Natural Medicine Centre founded in 1866. After modernization it was connected to the sanatoriums ‘Stanisław’ and ‘Józef’ and adapted for the rehabilitation of patients with severe motor dysfunctions. The centre has a rehabilitation gymnastics pool with thermal sulphide-fluoride mineral water, gyms, hydro and physical therapy rooms and catering facilities.
– ‘Jerzy’ Natural Medicine Centre, 57-540 Ladek Zdroj, 1 Ostrowicza street, phone: +48 74 81 46 324.
‘Jerzy’ is one of the oldest spa treatment facilities in Poland. Its origins date back to the 13th century. The plant was built on the spring of ‘St. George’ (George is Jerzy in Polish). This spring is characterized by the highest radon content among the land waters (about 1300 Bq / dm3) and its healing properties in the treatment of musculoskeletal diseases have been used in Ladek for centuries. Very good healing effects are also obtained here in the treatment of skin diseases, peripheral vessels and endocrine disorders.
– Rehabilitation Hospital ‘Stanisław’, 57-540 Ladek-Zdroj, 2a Wolności street, phone: +48 74 81 46215
– Regional Osteoporosis Centre, 57-540 Ladek-Zdroj, 1 Ostrowicza street.
– ‘Józef’ Spa Hospital, 57-540 Ladek-Zdroj, 2b Wolności street, phone +48 74 81 46 227 ext. 258
– ‘Jubilat’ Health Resort, 57-540 Ladek-Zdroj, 6 Wolności street, phone +48 74 81 46 227 ext. 201