There was a belief that nothing more than what had already been discovered after the great heritage of the Cistercian musical culture in Kamieniec Ząbkowicki has survived. This was the case until the parish priest opened the organ cabinet in the choir … 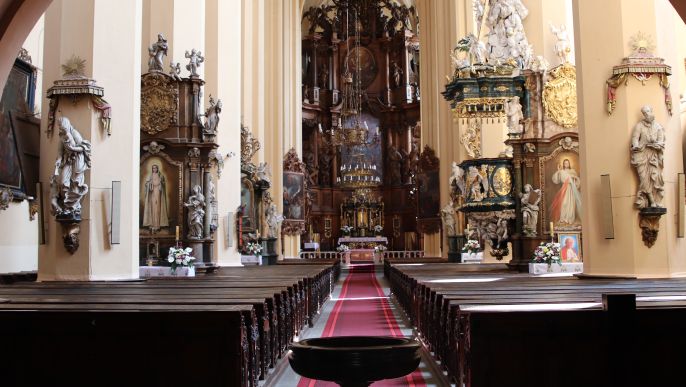 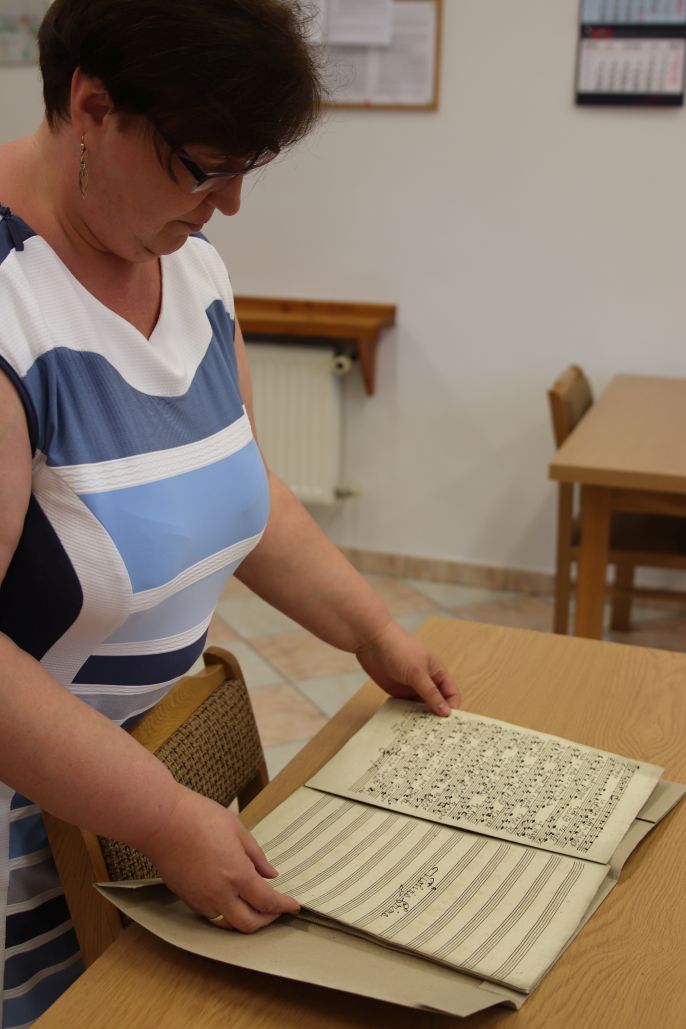 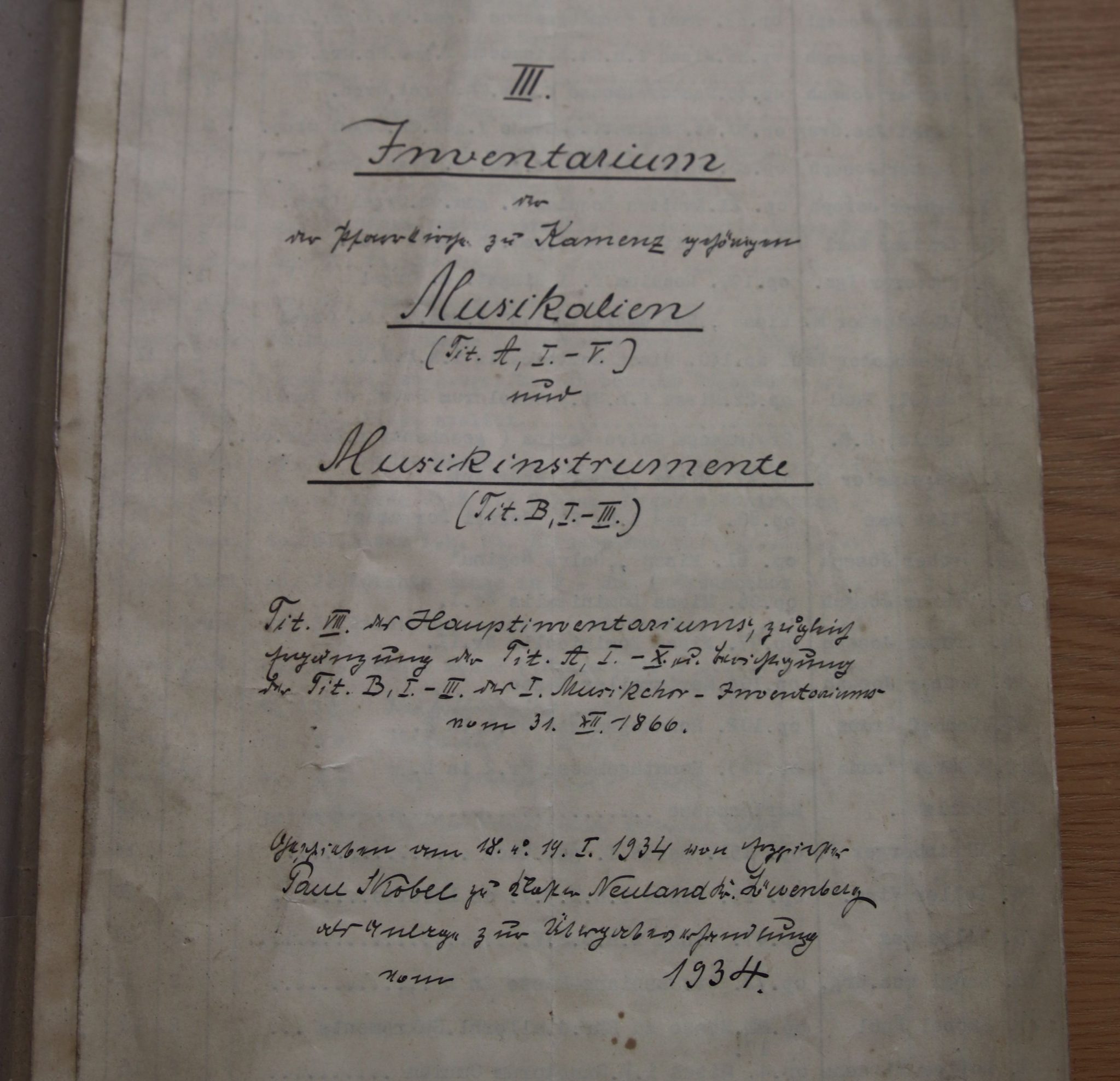 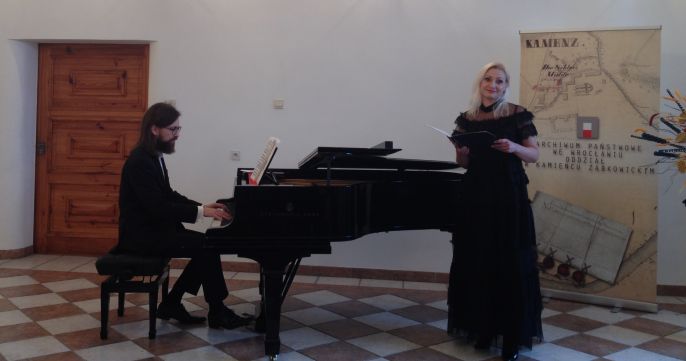 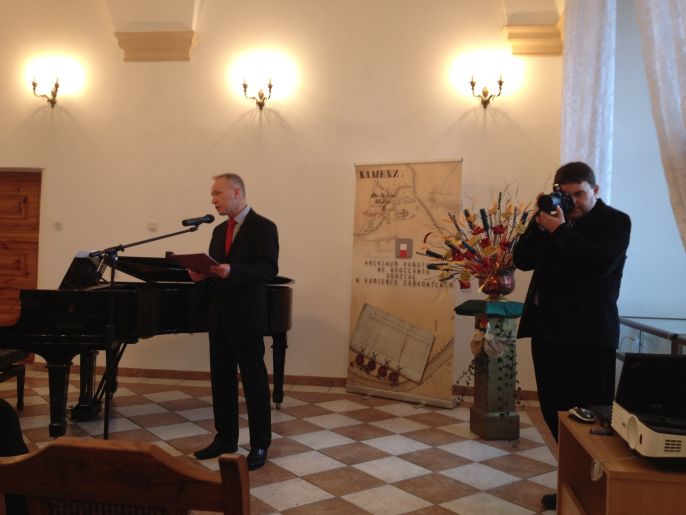 The church in Kamieniec Ząbkowicki was built by Cistercians who created a real economic empire. You can still see baroque paintings by Michael Willmann, also known as the Silesian Rembrandt, who operated with light in such a way that one has the impression that scenes from thousands of years ago are played out before our eyes. Abbot Woywode rebuilt and equipped in the baroque period as many as 70 local churches. When he went out with mass, not only the organ was playing, but also a real orchestra, for which composers specially composed pieces. The original Baroque drum has survived in the parish collections. It was believed that nothing more of the great musical heritage of this place survived. This was the case until the parish priest opened the organ cabinet in the choir …

Treasure. This is what musicologists and artists like Magdalena Cornelius from the Lower Silesian Music Festival says about the finding. In the closet, piled with newspapers, there were sheet music. The oldest are manuscripts, the rest, the youngest, are printed records of musical works. The second part of the collection was lying in the choir in what seemed to be an ordinary closet.

It is not known what was the fate of the collection of musical items from 1810, when the Prussian authorities closed the Kamieniec abbey (along with other contemplative monasteries in Silesia) in order to take over its property and thus fill the budget hole. The movable property was parceled out and the real estate was sold.

With time, the Germans realized that they had missed musical items. There is evidence of it. Some of the cards have a stamped in to prove that the collection was prepared for transfer to the special collections of the university library in Piasek in Wrocław (by the way, they were located in the former monastery after secularization in 1810). There are no references, which proves that only a preliminary selection of the collection was made in the church in Kamieniec Ząbkowicki. The fact that someone was interested in music is also evidenced by the fact that newspapers were stuck between the pages. Moreover, the cards were mixed up. Why was the collection not taken to Wrocław?

Archivists from the state archives in Wrocław, which had their branch in the former abbot’s palace in Kamieniec Ząbkowicki, suppose that because World War II broke out and no one had a head for the musical items from the Kamieniec church.

– I am not a musicologist, I could not professionally assess the rank of the find – says the parish priest, Fr. Wojciech Jarosław Dąbrowski. – I got in touch with Ludmiła Sawicka, a musicologist, currently living in Wrocław. Together with another musicologist, professor Jolanta Byczkowska Sztaba, they undertook the evaluation of the collection and ordering of the mixed scores, arranging them into individual pieces. It turned out that the collection includes pieces specially commissioned for the Kamieniec abbey and pieces commonly known by composers such as Haydn or Mozart, which were adapted for the needs of the Kamieniec orchestra.

Maintaining the orchestra cost a fortune, but the Kamieniec abbey had a golden age in the baroque period. At that time, large-scale counter-reformation activities took place in Silesia, under the patronage of the Catholic Emperor Habsburg. Lutherans responded to these activities by building Churches of Peace and Churches of Grace, whose interiors amaze with the richness of decorations. Art has therefore become an important weapon in religious polemics. Both sides have set the bar very high in this dispute. The Kamieniec Cistercians coped with it. They created a piece of paradise in the church. Heavenly music, narrative paintings by Willmann, amazing sculptures surrounding the aisles and an impressive main altar – this is the space where the abbot entered celebrating the pontifical mass, wielding a crosier and having a miter on his head – signs of the abbey’s authority testifying to his extraordinary position (he had power in the abbey equal to episcopal authority). And you have to know that Theatrum Sacrum was not something special in the Baroque period in Silesia. The orchestra also had the Cistercian abbey in Krzeszów. In one of the paintings presented in the museum in the abbot’s former guest house, she was immortalized during the ceremony.

Culture is mainly shaped by large centers. In the past it was similar, but in the Baroque period (18th century) in Silesia, the Cistercian abbeys, mainly Lubiąż, Henryków and Krzeszów, were the carriers of high culture in the peripheral areas of the region. They still impress with their architectural momentum. We generally have a vague idea of ​​the spiritual and non-material dimensions. That is why the discovery of musical items in Kamieniec Ząbkowicki is an event of such great importance. It gives an idea of ​​the life of the place that the Prussians thoughtlessly destroyed in 1810. At the peak of the heyday of the baroque abbey in Kamieniec Ząbkowicki, it was an institution shaping the culture of the region in the Sudetes. In the times of Abbot Woywode (the one who equipped 70 churches), 20 monks and about 70 lay brothers stayed in the abbey ( lay brothers were monks who did not have priestly ordination and served mainly in grangi, which is  monastic farms). The property of the abbey included approx. 7 thousand. ha of land. It also included quarries, breweries and a number of other facilities. The profits were allocated to the statutory goals of the order, that is “to the greater glory of God”. The Cistercians, guided by the principle of “Ora et labora” (“Prayer and Work”), created from abbeys real enterprises that were a model of thrift.

As a result of the dissolution of the Cistercian order in Prussia ceased to exist, its goods were taken over, parishes were established according to Prussian patterns. Fortunately, under the agreement with the Duchess of Orange, who bought the post-Cistercian goods in Kamieniec Ząbkowicki, the seat of the parish was the former abbot’s palace, but the parish priest shared it with the Prussian customs office. However, the development of monasteries was stopped earlier – in the second half of the Eighteenth century, when Silesia was occupied by the Prussian army. The monasteries were levied contributions, high taxes, and the choice of abbots began to be interfered with. The diocesan clergy were also persecuted.

The abbey church was opened to the faithful only for one Sunday mass. The religious part was separated in it by a grid that has not survived. During a fire in 1817, its individual elements were broken off in order to save the building. Then it was not recreated, on the contrary – it was dismantled completely. The interior of the church was slightly different than today, because the altars, which are now at the top of the transept, were previously located in the main nave. This was due to the church’s two-fold division: the part intended only for monks (enclosure) and the part for the faithful. An unusual memento from those times has been preserved in the parish collections. It is an abbot’s lamp made in silver by the goldsmiths of Wrocław. It was lit so that the people would know that the abbot was in the presbytery.

The collection of notes discovered by the parish priest was deposited in the Kamieniec state archives, because the parish does not have conditions for their storage. In addition, they had to be disinfected.

These were not destroyed, but they could have been fungus – says Krystyna Dróżdż, the head of the archives in Kamieniec Ząbkowicki – They went to a special chamber for 24 hours, and it looks like that you give a special powder and inject gas that kills all microorganisms so that they do not destroy the files. The collection is about a meter long, so it is quite large. As for the dissolution, wars and other historical turmoil, it is a miracle that it has survived.

Such good cannot be wasted – says the pastor. – A catalog is in preparation, but in the meantime I found a small collection of notes that also needs to be disinfected and processed. I came across it after taking over the collections that were on deposit in the local memorial room. They rested in a dresser drawer, which was part of a large wardrobe for liturgical vestments that had been moved to the souvenir room.

Sometimes the treasures are hidden in attics. However, the attic of the Kamieniec church is empty, but the basement is to be discovered. They became the posthumous residence of the abbots.

We knew that centuries ago the Kamieniec abbey was a significant cultural center, and by finding musical items we gained proof of it – says the parish priest. – We decided to share this treasure of musical culture with everyone. When we diagnosed that this was an unusual discovery, we started looking for musicians who would like to present these pieces. We do not have the money to hire an orchestra of several dozen people, like the Cistercians, so we decided to transcribe the works. The Cornelius couple did it. Thanks to this, the music that resounded in these walls centuries ago is now available to everyone.

The concert accompanied the promotion of the publication “The Cistercian Trail in Lower Silesia in an archival document”. It is supported by the Lower Silesian Tourist Organization. This is the next volume created in cooperation with the State Archives in Wrocław. They would not be there if it were not for the passion and commitment of Zbigniew Szczygieł, a councilor of the Lower Silesian Voivodeship. As a result, the archival resources, developed in terms of tourist usefulness, are used by specialists from various industries.